So far, we have not been talking about who are the people behind Curling Tallinn. Thanks to them hundreds of company events, 8 international tournaments are organized and we have curling ice to play the game for 9 months. Now it’s time to fix this and introduce our team.

No bookings are posted on the calendar without Anželika’s knowledge. And our calendar includes all our tournaments, Estonian and Tallinn Championships, promotional events, school group sessions, club members sessions, introductory sessions for beginners, etc. If the timetable of tournaments and championships are generally long known (one to one and a half years), then it is important to find suitable “windows” for corporate events and finding this “window” can sometimes be a major challenge. One corporate event can mean long correspondence on topics: what event package to choose, when to have an event (as well when it is possible for the curling arena), what kind of catering package to order, when to have a catering, where to have catering, in what language the instruction needs to be done etc. Likewise, Anželika is responsible for all invoicing. Although Anželika does not actively play curling (which does not mean that she is not sporty), it can be said, however, that she contributes to curling daily and is definitely one of the best in her work. Although Anželika’s surname may be the most difficult to write or say out loud, we can be sure that all of her work is under control. 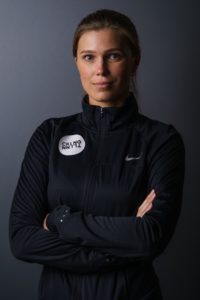 If you operate a curling arena (especially in a country – such as Estonia – where curling is still a relatively new sport) already mentioned corporate events play a very important role. But for “Curling Tallinn”, however, the organization of various international tournaments has become more and more important as well. I will not stop here more: you can read about next season’s tournaments in more detail here and there is an interesting post about the history of Tallinn Cup as well. But to sum up, if all the tournament days are calculated together, then we get almost one month out of nine that is booked just for international tournaments. Although Juuli started the new era of organizing international tournaments back in the fall of 2016, her exposure to curling had started much earlier. Between October 2005 until February 2018, 40 international tournaments have been organized in Tallinn and Juuli has been part of 20+ events of them. It can be argued that Juuli has become Estonia’s most experienced and competent organizer of international curling tournaments. In addition to the organization of tournaments, the annual Tallinn student, and teachers championships have been organized by her. One of the most memorable moments will be the Olympic Celebration Tour organized in cooperation with World Curling Federation in March 2017. In addition to the foregoing, Juuli keeps an eye on our FB and Instagram accounts. Although Juuli herself does not actively play curling, we can also say that Juuli is contributing to curling daily and is very sincere, correct and consistent in her work. 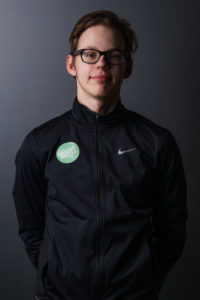 Our Ice Technicians also help to organize corporate events. Here are just a few examples of feedback from our clients: 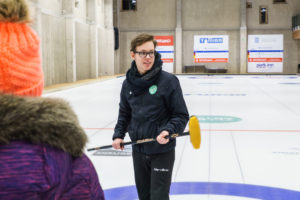 Eiko in his zone!

Without going into too much detail how to make curling ice, our ice technicians constantly have to train themselves. And you can get better only when you train enough. Just as the Estonian curling develops, our players and everything around will also develop (organizing tournaments and making curling ice among them). Development and progress need time. It’s Eiko’s second full season with us and he has been in charge of both Estonian championships and World Curling Tour events. In addition, he has been taking courses in Germany and world top curling ice technicians have been here to teach our staff. The work of the ice technician is not easy – long days in the curling arena will definitely take energy, but positive feedback from customers will definitely help rebuild the batteries. When Anželika and Juuli are doing their work sometimes behind closed doors, Eiko’s work is mainly on the ice. When Eiko is not doing ice, he is also keen on taking part in curling competitions. He is even one of the few Estonian juniors who has had the privilege to participate in the II. Youth Winter Olympics (Lillehammer, Norway in 2016).

Margus Tubalkain is our ice technician and instructor. 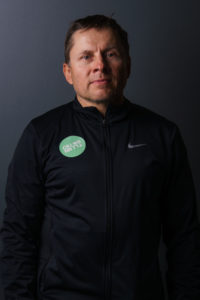 When Eiko is our youngest, Margus is one of the most experienced of us. For Margus, it is also second full season with us, but curling has been a passion for him for 10+ years already. If we would select the Sportsman of Curling Tallinn then it is Margus. He takes part in different curling competitions, he runs marathons (he has completed 5 marathons and the best time is excellent 3:25:47), if he does not have time for a marathon, then there is also a half-marathon (he has participated in 20 half marathons and the best time is fantastic 1:30:57). I also know that he likes to play tennis and badminton and also to ride a bike, ski and roller skate. It’s easy with people like Margus because he understands the sports, it’s nature, depth, pain and, of course, charm. If Margus is not doing curling ice or sports, he organizes various public sporting events. If I think Margus, I think healthy and sporty lifestyle. Finally, some customer feedback to Margus: 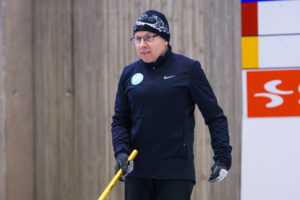 Margus helping others to understand the game of curling.

Founder and board member of Curling Tallinn Harri Lill. 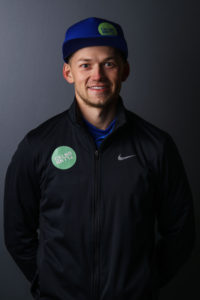 If we were to select best curling player of our team, it would hard to beat Harri. But let the facts speak for themselves:

The man is like an orchestra. In the first season at the new arena (fall 2014), Harry had to make ice, instruct company events, organize international tournaments, and as a player to prepare for the 2014 European Curling Championships. If this is not enough already he was also one of the chief organizers of the 2015 World Junior Curling Championships (February-March of 2015). It was definitely a difficult but also a very educational period, but I never heard Harri lamenting. He saw everything as an opportunity. We are glad that the Curling Tallinn team has grown significantly, and Harri no longer needs to do everything by himself. It has given us the opportunity to find to all of us the focus. Harry’s strength is not just knowing the game of curling. It means also knowing the tactics, the rules of the game, how curling team works, how to prepare curling ice, the equipment (especially the stones) and its maintenance (did you know that Curling Tallinn ice machine blades are sharpened in Canada?!), the principles of curling-arena work (including ventilation, correct ice temperatures, water purification system etc.). Harry is not just Mr curling, though he is. He is not just a winner, though he is. First and foremost, he’s one great dude with a good heart, and it is our joy his passion is curling. 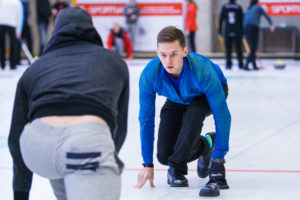 Harri is showing the right technique at the Olympic Celebration Tour open house session back in March 2017.

In conclusion. It was the end of 2003 when for the first time I was struck by the idea that there could be a curling in Estonia as well. I would not have believed that soon, 15 years later:

This journey is not small, but a great miracle! During this journey, it has become clear that the more organizers and the so-called “behind the scene’s” contributors we have the better. Our common interest must be the growth of club members.

Testimonials were written by Fred Randver. 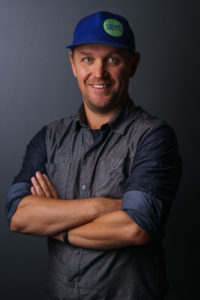 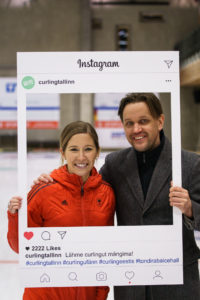 Together with now 2-time Olympic winner Kaitlyn Lawes (Canada) during Olympic Celebration Tour back in spring 2017.