Curling is a fun sport which combines physical and mental skill. It is also one of the few sports in the world where all ages, genders and abilities can compete against each other. Curling is fun! 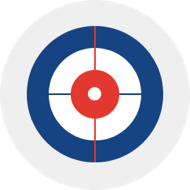 The basics of the game are simple. There are two teams on a sheet of ice who take turns to deliver the stones. Both of the teams try to get their stones down to the other end in order to be closer to the center of the target or the “house”.

Each team consists of four players – the lead, second, third and the fourth, also known as the “skip”. In each of the ends every person gets to deliver 2 stones. The responsibility of the Skip is to lead the game of his team, call the line for the shots and to give general feedback to players. 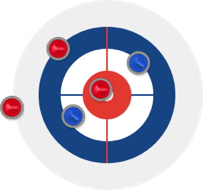 When all 16 stones have been played, the end is finished. A team will score one point for each stone that is closer to the center than the best opponent’s stone. In order to count the stone has to touch the “house”.

Team who scored will always start the next end. This way the team who did not score in the previous end will get the last stone advantage. Games on the competitive level are usually played with a time limit and therefore a game lasts around 2-2,5 hours or until the agreed number of ends have been played.

Team with the most points in total at the end of the game will win.

Curling stones are made out of granite and they weigh around 20 kg’s. Plastic handle on the stones offers players some grip in order to apply a curl to the stone. At the end of the sheet there are rubber “hacks” which provides traction to the players in order to slide and deliver the stones. Every curling club has stones and hacks on-site, therefore you do not have to carry those around.

Probably you have seen curling players sweeping the ice before. The purpose of this process is to create some heat on the ice in front of the stone which also helps the stone to travel further. You can also affect the direction of the stones by sweeping them. Brooms are free to use at all our venues.

Curling players, also known as curlers, wear special footwear while playing the game. One of the soles is providing ability to slide (usually teflon) and the other sole will provide grip for moving around on the ice. If you’re coming to play then we offer curling shoes for you, free of charge! The rubber soles will ensure your safety throughout the event.

Tondiraba Ice Rink hosts the most modern ice facility which has been built with curling in mind. Three full-size stationary curling sheets are opened from the beginning of August until the end of May which makes Curling Tallinn season one of the longest among curling rinks in the world.

Tondiraba curling rink is surrounded with solid concrete walls which keep the climate inside the building very stable. The rink also holds a small stand helping the curling fans to enjoy a higher view towards the curling sheets. The Restaurant at Tondiraba Ice Rink is also overlooking the curling sheets from the second floor, resulting in a perfect place for enjoying curling games while staying in a warm room.

Our curling rink offers only world-class equipment. For example, our playing stones are basically identical with the stones used at the Olympic Winter Games as they come from the same manufacturer – Kays of Scotland.

We believe that the Tondiraba curling rink will be the favorite for local recreational curlers as well as for curling professionals from all over the world.

Curling is waiting for you!

Our goal is to develop curling in general! Our development program includes services for: