This past week was historic for Estonian curling. It was the first time Estonia was visited by an Olympic gold medallist – from the 2014 Olympic Winter Games in Sochi, Russia. We had the honour to welcome Canadian Kaitlyn Lawes to Tallinn. We had a busy schedule from Thursday until Sunday evening. Here is a summary from the four day Olympic Celebration Tour (OCT) in Tallinn.

On the 16th of March Kaitlyn visited the Estonian Parliament. Our host was parliament member and Estonian Curling Federation president Mr Rainer Vakra.

On the 17th of March we had one session on ice with 20 university students instructed by Kaitlyn. The on ice session was followed by a shool visit where Kaitlyn introduced her Olympic story and we played floor curling. Again around 20 students got insight into the game we love. Kaitlyn had also one random meeting with 30 girls who were very surprised when during regular curling instruction an Olympic gold medallist (medal in her hands) came to the arena and we had a nice picture of that as well. 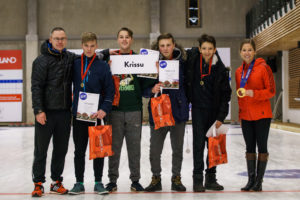 18th of March was our biggest challenge. We had booked four hours for new people to try curling. We were very surprised when we arrived at the arena and around 80 people were lined up to for the introduction. It was a challenge to host 80 people at once on a three sheeter, but with World Curling Federation Competitions and Development Officer, Darrell Ell’s, experience we were in good hands. Altogether we had around 150 visitors which under the circumstances was the maximum again. In the evening Kaitlyn had a private session with the Estonian ladies teams. It was a good day for Estonian curling. You can find the gallery of try curling day here.

On the 19th of March from 10am until 1pm we had a mini tournament with some experienced players and with some beginners, of which some came in from the open house clinic helded the previous day. We had 40 players mentored by Kaitlyn. The second part of the day was dedicated to the Estonian mixed doubles teams.

The Estonian Curling Association and Curling Tallinn were very satisfied with the OCT, with the format, visitor numbers (300+) and media coverage.

A big thanks go to the World Curling Federation and head of the programme Darrell Ell, The Foundation for Global Sports Development, Estonian Curling Association, Curling Tallinn, Cultural Endowment of Estonia and the Board of the Gambling Tax. Gifts to our school championships were provided by Sportland.

Our biggest thanks of course go to Olympic champion Kaitlyn Lawes, who helped us to promote the sport, which has never been done before. The curling world can be so proud of the athletes like Kaitlyn Lawes despite being a successful athlete is acutally very kind and has a great personality. It is a fact that Kaitlyn has many new fans now in Estonia and we wish every success in her personal life and in sports. We hope to see her back in the Olympics next year!

Curling promotion in Estonia continued with first Teachers Tallinn Championships with six teams and around 25 teachers taking part. It is a very important target group for us and during last two season we have had around 50 school teachers going through curling course.

With the weekend behind we had 31 people (8 of them children) back to try curling and continue their curling journey. This time, unfortunately, without Kaitlyn.